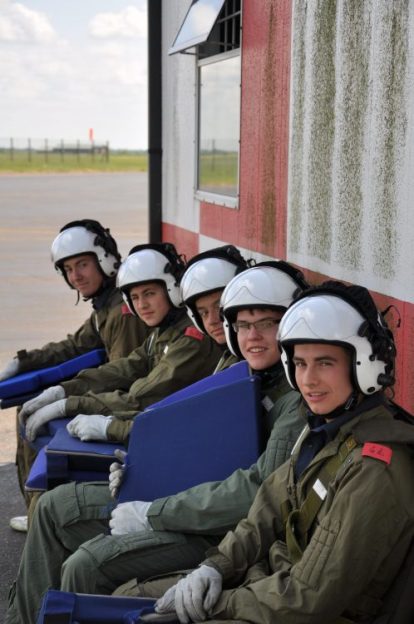 Air Cadets have the opportunity to fly with Royal Air Force pilots in Tutor aircraft. Flying takes place at one of 12 Air Experience Flights (AEFs) where cadets are shown how the aircraft flies and given the chance to control the aeroplane, experience aerobatics or simply admire the view. . AEF aircraft are flown by volunteer pilots, all of whom are current or former service pilots. In addition to the Tutor, Cadets also have opportunities for flying in other Service and Civilian aircraft when visiting RAF camps.
Air Experience Flights – Feel the thrill of powered flight, with a fully qualified pilot to guide you through taking control of the aircraft yourself. Not only have the opportunity to learn about the flying controls but you’ll experience aerobatics and low level flying too.
Air Cadet Pilot Scheme – advanced handling of the aircraft. Complete this successfully and you’ll be awarded your cadet pilot wings. And if you do exceptionally well you could be recommended for further training
Air Cadet Pilot Navigation Training Scheme – A great opportunity to use your navigation skills, this two-week course where you fly for up to eight hours is open to selected cadets. Success will lead to you gaining your ‘wings’.

Gliding – Soar to success! There are fantastic opportunities to glide while you are a cadet, with the ultimate goal being a solo flight.

Training is in four stages:

In the RAF Air Cadets we do two types of Gliding: Conventional and Powered. Our conventional glider is called the Viking T.1 .   You are winched into the sky at almost 100 mph until you reach 1000 ft. Once up you detach the cable and then it’s just you and the sound of the wind until you land. You can do some aerobatics in the Viking

The second glider the RAF Air Cadets fly is the Vigilant T.1,a powered glider. Flying one of these is like flying a normal aircraft but with the added bonus of when you want to, you can turn the engine off and glide just like the Viking making you fly further distances